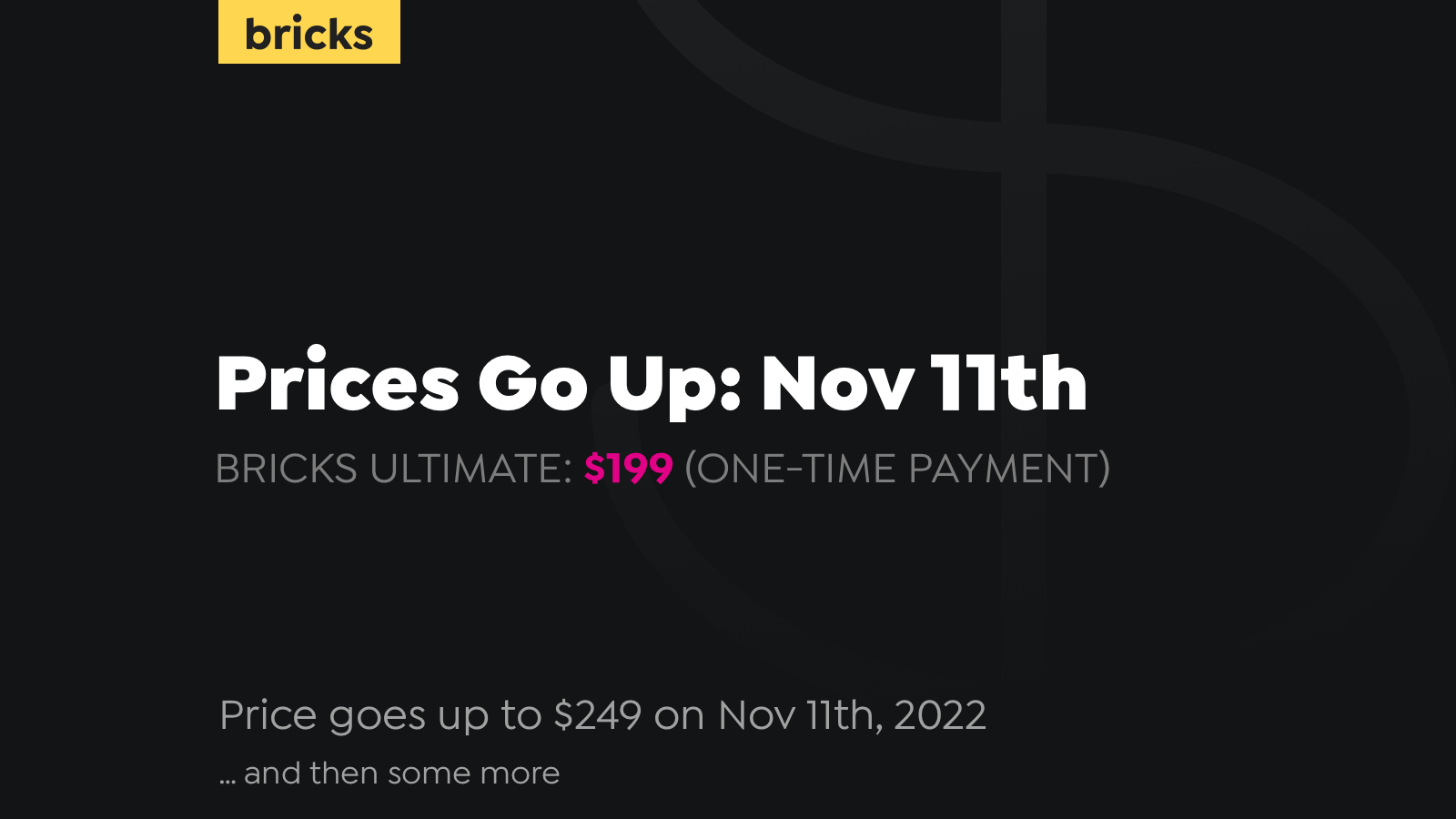 I hope you are doing well. It’s been a while since our last announcement.

While our previous posts were mostly about a specific update, we’ll probably publish more “recap” kind of posts every few weeks from now on. As not every update will require its own post anymore. Speaking of …

We hope you enjoy the smaller, more frequent updates (every week or two) that we switched to last month.

Long story short: Many of our past releases were simply too big. Even delayed getting hotfixes out there fast enough. Which has also been noted by the community.

Hence the switch to much smaller, more frequent updates (every week or two).

Thanks to the new update cycle we released four updates in September that included some of our most requested features:

We are currently working on CSS grid, the mega menu builder, the mobile menu builder, and the popup builder (Roadmap – Bricks). All of these features are scheduled for release this year

CSS grid (like the new element conditions) will probably be an “in-stages” feature. Meaning we’ll roll out an initial solution, collect user feedback, and make adjustments as needed to properly build out this feature.

This one shouldn’t be a surprise as we always communicated that prices will increase as the builder advances.

The last increase was back in January. Since then we’ve released hundreds of changes (Changelog – Bricks)

So on November 11th Bricks prices will change as follows:

We never have & never will offer any discounts or sales on the Bricks lifetime deal!

Meaning the earlier you join Bricks, the lower the price. It’s that simple.

If you do consider getting your own Bricks license or upgrading from Starter to Ultimate (simply email us as you’ll only have to pay the difference), doing so before Nov 11th would be a good move: https://bricksbuilder.io

We’ll continue to adjust our prices, and start introducing yearly subscriptions as we approach Bricks 2.0 next year.

To everyone who has already joined the Bricks family THANK YOU ONCE AGAIN for your continued support, and for helping us spread the word about Bricks

Another massive THANK YOU to everyone who has helped fellow members here in the group & the forum, to all the template designers, extension developers, and reviewers. You rock

Until next time,
Thomas & team

Love the new update cycle. This is really awesome.

Thank you, Thomas and team, for listening to the community. The new update cycle works very well. I look forward to reading the “recap” posts.

This is crazy. How can you ship all those features so fast. I barely catch up with reading all those updates. Crazy stuff. So excited about the mobile menu builder. Thank you, team!

@thomas Love the cycle updates and all the awesome work for the builder. Also, appreciate what you and your team have done and helped, as always.

Looking forward to seeing the upcoming features you mentioned above come soon.

Glad I onboarded really early on after being a happy files user, and I am sure the current strategy is thoughtful and helpful for growth, specially in emerging countries. On the other hand, in the longer run looking at what happened at Oxygen and the problems ACF Pro is experiencing and gazing at a probable market saturation the option of this becoming something recurring should be considered at some point. Another option might be a market of premium themes that can be bought coming from Thomas and his team. Greetings from a fellow German.

Closing the comments now as this thread is meant to be the official announcement about the upcoming price increase, not a discussion about it.