Hello,
I don’t know if it’s right to post my idea already and here, because it hasn’t appeared in the ideas list yet.
If it is not ok, then please delete the post. Otherwise, I have submitted the following idea:

Subject: Importer for CSS fontsets.
I would like to have an import function to install fonts as a batch.
There are websites (e.g. google webfonts helper) where you can compose fonts and get a ready to use CSS file to load into HTML.
The importer should be able to read such a file with all fontfaces and store it in the WP database. So it would be also possible to store fonts at another place than in uploads folder.

This saves a lot of time during each installation

It’s wonderful to submit your idea here to start a discussion about it. However, the idea board is the correct place to submit it directly. After the submissions have been reviewed (for feasibility, for example), they are published. Depending on what we are currently working on (1.3.7 stable), this may take a little longer.

As you might know, you can already upload and use custom fonts within Bricks, which doesn’t require any custom code or stylesheets because all the styles are generated automatically for you.

I think installing with the already existing method doesn’t take more than 2 minutes for a font with three weights (apart from the fact that you can generally use all Google Fonts for now without installing them - if you then decide, you can still install them locally, keyword GDPR / DSGVO).

So I have a few questions:

I look forward to your response!

Thank you for your feedback.

I had already entered the idea on the idea board before the post here. So far the entry was neither confirmed nor rejected.
The subject is: Importer for CSS fontsets.
The content as in my initial post.

Yes, I know about the possibilities to create the fonts in the backend. Also the later clarity to find the local fonts better, is by far better than with oxygen.

Currently you have to create each font separately, so the woff, woff2 and the ttf.
For this you have to select a font-weight 3 times in the media-manager. That’s 18 clicks. For the 3 font files
Add font → Upload → Select font file → Upload fonts → Select font in MediaGallery → Confirm selection.
Without question this is fast with a Schrfit. Let’s calculate further:
2 fonts, one with 3 font-weight (light,normal,bold) and one with 6 variants (light,normal,bold, light-italic,normal-italic,bold-italic).
That’s 9 variations with 3 font files each (woff, woff2, ttf).
27 x 6 clicks = 162 clicks to load the fonts.

If you create a font package with the google webfonts helper, you can select all font weights and the tool creates the finished CSS file. You get everything in a zip file for download. With 5 different fontsweights this is not 10 clicks incl upload. If you do that in the current Bricks version you need 90 clicks for the same result.

Furthermore you can use such a font package multiple times for different WP installations.
Changes can also be made quickly using an editor (e.g. Visual Code).

If you rarely make a WP installation, the current options are perfectly sufficient. If you do something like this more often, you want something more comfortable. You can create a template and do the whole thing in a few seconds.

To your 2 question: There is no problem for the upod folder as a storage location.

After that, I went to the website google webfonts helper and downloaded the same font set.
This took 1 min. 46. I also got 2 variants of the .css file. One for the best browser support. This contains the files [eot,woff,woff2,ttf,svg] and once for modern browser, which contains only the .woff, woff2.

At first sight it is “only” 5 min. If you do this 12 times a month because you are a developer and customers want to have different fonts. Then 1 hr time has passed quickly. 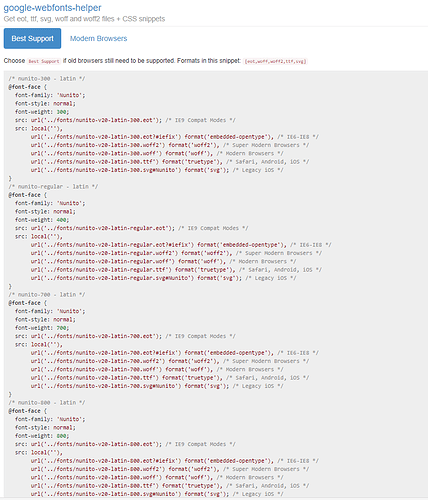 Thank you very much for your extensive answer!
I see what you mean, though. But, of course, your example is relatively fierce

But in principle, there is nothing against submitting the idea to the Idea Board. Let’s see how many users like it

I have submitted the idea again.
Do I get a message when a submitted idea is declined?

Not quite sure, but I don’t think so. But if it’s published you’ll see it