It would be nice if there was a dedicated class management area where we could see all selectors (even better if it shows used/unused) and manage selectors via add new / edit / delete / and even organize/sort via tag or folder structure.

It’s somewhere on the roadmap / ideaboard. I am quite sure they will implement this but not very soon. It’s obvious that there are more relevant and urgent tasks to solve or features to launch.

@beziehungsweise - I believe you’re referring to this, on the Roadmap.

It currently has 788 votes (needs more!) and is in the “Planned” column. 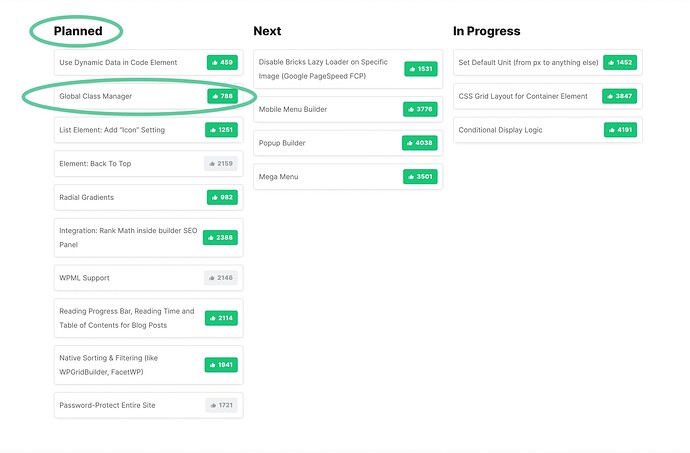 Yes, it’s “Planned” currently, no ETA of course and presumably not in the near future yet given it’s not in the Next nor In Progress phases yet.

Make sure we vote it up!

To add to this, I like what Microthemer and Cwicly both do. Depending on the drag and drop order you arrange them in the class manager, it’s arranged in the stylesheets.

I do not feel that it is “obvious” that there are more relevant and urgent tasks to be solved, and surely NO feature would be needed more by a professional than this. If you do not use classes you are a hobbyist. Simple as that. CSS is at the core of all web design today so to say a manager of that is not relevant is a mis-statement.

Yep. The classes are so powerful yet whether you take this road or not in your workflow depends on the usability and management of the potentially dozens of classes. But so glad that the editor/manager for classes is under consideration.

I would also like to see some sort of regex like bulk class rename functionality. When importing templates this could allow me to update the class names to be consistent across my entire site.

I would also like to see the ability to combine classes. Sometimes I realize I have 2 similar classes that should be one. Right now I would have to pick which class I want to use and then try to remember where I used all the other classes and then go to the elements remove the old class and then add the new one.

Also I think Bricks should manage css variables as well which would make sense to implement when Global Class Management.

This request is related to feature request: Since the above request is on the roadmap already, if this related feature request gets approved it would make sense to implement it at this point. Since Bricks is a css class first builder and already manages classes created in the editor, I think it would be extremely useful for the same functionality to exist for css variables. Currently I define my css variables in a code snippet plugin. As I style the site I end up finding situations where a…

Just posting a resource for the Bricks Team incase they are unaware of this plugin. WPGet released a temporary Bricks Class Management plugin to help others while we wait for the official feature.