Almost all of the forum posts of issues or feedback that I read, all end the same way…

Fixed in 1.4, planned for 1.4, listed for 1.4… and I don’t mind planning for a dev life cycle, but is there any way to find out what the anticipated release schedule for the life cycle is? I don’t even mind when the anticipated date gets pushed back as these things happen, but to have some kind of idea of what to maybe expect would be nice to hang on too.

I feel like I’m currently sitting in a holding pattern, not wanting to finish development in 1.3.7, but never actually seeing 1.4…

I’m not the type to jump on a beta, I’d rather hold out for a production release and deal with minor patches in the long run, even rebuild if the changes are dramatic enough to warrant it, but I feel like week after week, I have to come check the forums to see if there is a possible mention of a 1.4 release or update?

I’ve moved away from Bricks for a while now.
But I do keep up with the latest news about Bricks, which is getting longer in development and less frequently updated.
Is this a sign of a “mature company”?
Bricks is a good idea, and I look forward to coming back after 2.0!

Curios- Is there a real need that you cannot achieve right now with Bricks?
If so, what is going to do for your 1.4 that the current one does not?

No at this point there is not a need that I am waiting on.

At this point 1.3.7, has met my needs just fine, and certain areas that I found that may or not be bugs, there have been acceptable work arounds for me.

I only wish we had anticipated release dates so I better know when I can expect it.

But at the same time since the release of 1.3.7 and the following bugs released with it, I feel like the dev teams solution to all the messages are, “… will be fixed in 1.4”, which I understand to also be a major overhaul.

I believe it would do great for morale and ease tension to have a response more similar to “… will be fixed in 1.4. Which we’re hoping to release by end of May (or by fall 2022, by Christmas 2023)”.

This would do well, to help us as users to at least fore plan our needs instead of building until we find a bug that stops our process and creates more of a panic situation.

Agreed - It would help (in fact I came to this site to see if v1.4 was out yet) - I also know what a double edged sword committing to a release date can be

I’m just about to start development on a new project and I feel caught between wanting to get stuck in to the project and doing the sensible thing and wait for v1.4 (for all the reasons detailed above).

It will also be good if they make it clear what feature will come in what version of Bricks. These are the features where the work is going on. If they mention it like that they expect this feature to come in version 1.4, 1.4.1, 1.4.2, 1.5 etc then it will give clear idea to the users when they can expect the feature. 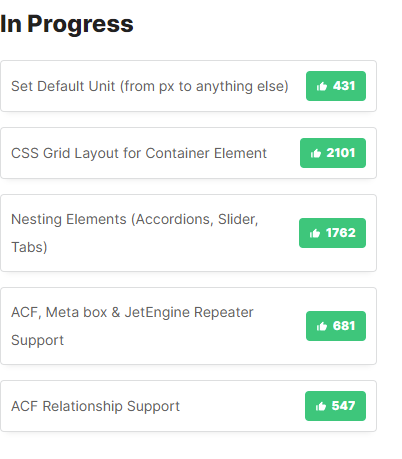